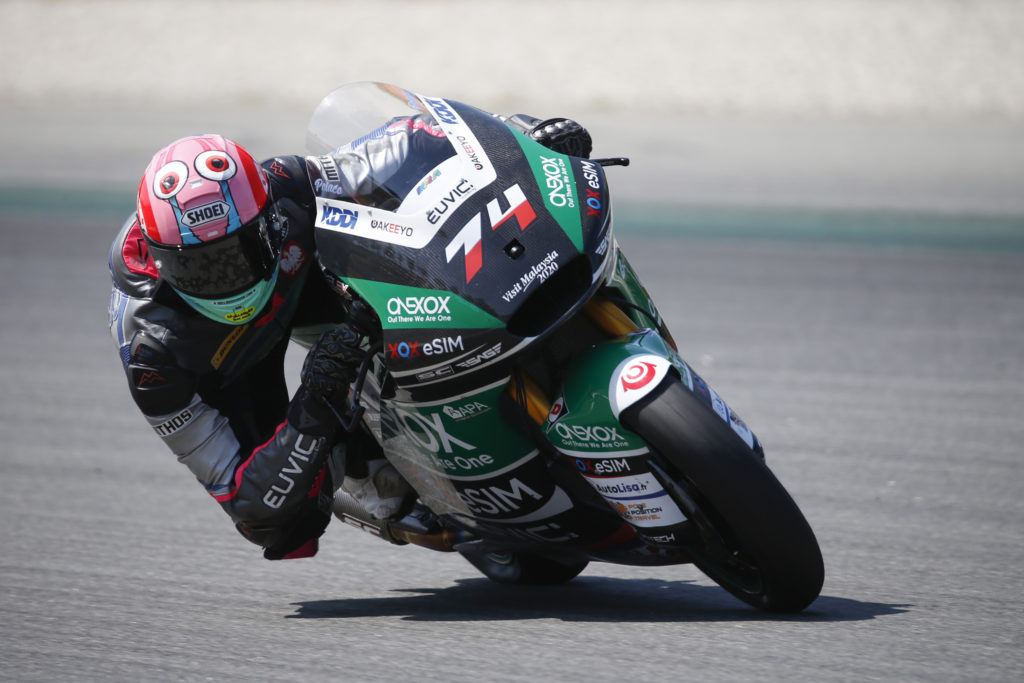 Currently seventh in the European Moto2 Championship, the 18-year-old covered a total of 50 laps during two days of running at the Circuit de Barcelona-Catalunya.

The young Pole tested with the Spanish SAG Racing Team with which he was aiming to make his World Championship debut this June with a wild card entry at the Catalan Grand Prix. The test setup included technical staff working with Biesiekirski in the European Moto2 Championship.

“I’m really happy to have finally made my debut onboard a World Championship-spec Moto2 bike even if it wasn’t, as originally planned, during an actual Grand Prix event – says Piotr Biesiekirski. – The differences between the European Moto2 and the World Championship bikes are quite significant. The Triumph engine has a different capacity and characteristics, the Dunlop tyres are wider and have a different profile and the electronics are much more advanced. There’s a lot to learn but the different riding style suits me quite well so I felt really good on the bike. It was a very short test with just four 40-minute sessions across the two days, but the first impressions are very positive. The base setting was aimed at a completely different riding style, so we weren’t focusing on the lap times but I’m happy with my pace and the progress we’ve made. I’d like to thank the entire team and I can’t wait for our next appointment.”

“Our plan was to race together with Piotr with a wild card in this year’s Catalan Grand Prix but for obvious reasons it wasn’t possible – adds Eduardo Perales, SAG Racing’s Team Principal. – We have decided to continue our collaboration with the goal of developing the rider and letting him understand the bike during testing. The first test was very much a shakedown, but still Piotr had managed to make a very good impression on the whole team. This machine is completely different to the one he’s using in the European Moto2 Championship but straight away his feedback was very precise and he knew very well what he wanted to improve the bike. He’s very young but at the same time he’s very smart and intelligent which is very important. We’re looking forward to the next steps of our collaboration.”